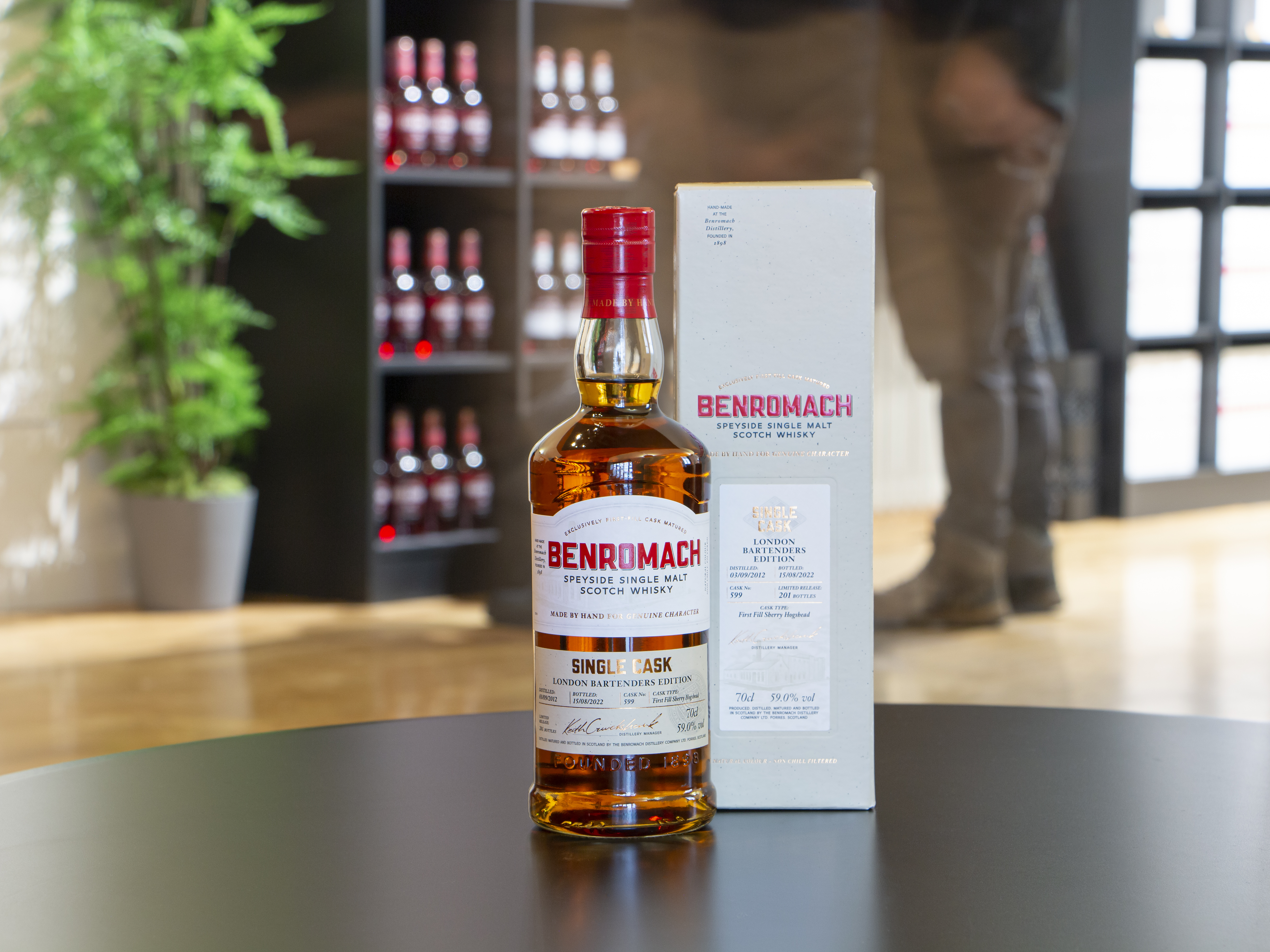 Benromach Distillery in Speyside has launched a limited edition single cask bottling, selected and bottled in partnership with a specially invited group of bartenders from renowned venues in London.

The ‘London Bartenders Edition’, developed in collaboration with Milroy’s of Soho, has been created following a series of industry events involving bartenders from across the city. To celebrate the partnership, Benromach will donate over £2000 to Hospitality Action to support the industry after a particularly challenging two years.

Back in June, a group of bartenders joined Benromach for a tasting session at Silverleaf Bar in the Pacific Hotel, Houndsditch. After sampling three unique casks, expertly matured at the award-winning distillery, attendees voted for their favourite whisky - a first fill Sherry Hogshead - revealed to be Benromach cask number #599 filled in 2012.

Bottled exclusively as ‘London Bartenders Edition’, the whisky exudes aromas of rich, stewed fruit with citrus zest and toasted hazelnut, followed by a touch of soft smoke. The expression is on sale now exclusively at Milroy’s of Soho, with just 201 bottles then available to a small number of handpicked pubs, bars and hotels in London. The whisky will be available by the dram in selected partner bars including, Swift Bars, Black Rock and Publiq

Keith Cruickshank, Distillery Manager at Benromach, said: “This cask strength Benromach whisky has been specifically selected by London bartenders and will be sold exclusively through the city’s top bars and restaurants.

“It’s smoky, zesty and bold. It will be interesting to see how other bartenders interpret the dram and how they plan on serving it – whether that’s neat, over ice or in a creative cocktail.”

Last month, Benromach and Milroy’s welcomed back eight bartenders to put their skills to the test as they took part in Benromach’s first-ever industry cocktail competition. Taking place at The Vault at Milroy’s of Soho, competitors were given a choice of three Benromach single malts as the base spirit, a table of ingredients and a mystery wildcard ingredient. With just 30 minutes to concoct their drinks, the bartenders went head-to-head as they presented their creations.

Jake Lovell-Hewitt from Publiq was crowned winner on the day with his ‘Green Apple & Cedarwood Sour’ creation, crafted using Benromach Organic single malt. All eight participating bartenders were treated to a trip to Benromach Distillery for a guided tour and tasting.

‘It’s always interesting to hearing bartenders’ thoughts on Benromach whisky firsthand and see how they interpret our whiskies. To thank them for their input, we’re supporting the industry by making a donation of £2022 to a great charity, Hospitality Action. Workers have been hit hard over the past few years, so this is just a small acknowledgement of appreciation for all the work that goes into the sector.’